Review: Unravel Me by Tahereh Mafi 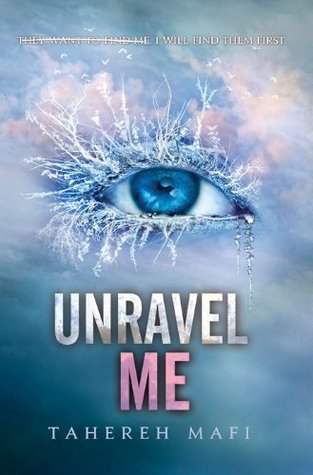 tickticktickticktickit's almosttime for war.Juliette has escaped to Omega Point. It is a place for people like her—people with gifts—and it is also the headquarters of the rebel resistance.She's finally free from The Reestablishment, free from their plan to use her as a weapon, and free to love Adam. But Juliette will never be free from her lethal touch.Or from Warner, who wants Juliette more than she ever thought possible.In this exhilarating sequel to Shatter Me, Juliette has to make life-changing decisions between what she wants and what she thinks is right. Decisions that might involve choosing between her heart—and Adam's life.

Unravel Me is the uniquely-written, exciting sequel in Tahereh Mafi’s trilogy. Juliette, Kenji, Adam and James have arrived in an underground rebel facility where Juliette has discovered she’s no longer alone; that there are others out there with special powers just like her.

I enjoyed this sequel just as much as the first book, if not even more. I thought it was a lot more action packed with plenty of character development. In Shatter Me, I spent the first part of the book very confused as I didn’t know why Juliette was locked up or why the world had gone to hell. Not having to focus on explanations meant Mafi could easily continue the story and introduced new, interesting characters that I really enjoyed.

I was going to complain about Juliette’s whining in this book, as well as her obsession with Adam and how she lived in her own bubble of pity and kept to herself, assuming everyone hated her. But then I read Kaitlyn’s review of how she saw Juliette:

“The truth is, though, Juliette’s attitude was a very important component of her growth. She was meant to be weak. How else would she become a much better person? The fact that she was constantly told to pull herself together showed how she was supposed to have her flaws. If the rest of the characters were blind to all her annoyances that were demonstrated, my thoughts would have been different. That would just detract from the story. With how Juliette was portrayed and how others reacted to her, it actually made the book even better.”

And I totally agree! If Juliette hadn’t been all “me me me” she would’ve been too selfless. Now I think she was the right mix of wanting to protect others while also wanting what’s best for her, and it made her growth way more realistic. We have to remember that Juliette was cruelly abused her whole childhood, and then kept in solitary confinement where she didn’t speak for almost a year. The girl is going to have problems, no matter how hard she tries. She’s going to find it hard to accept her gift as what it is: a gift. Or trust that people won’t be afraid of her. She has a lot of issues to overcome in the final book and I honestly can’t wait to go on the journey with her.

I absolutely ADORED Warner. My God. I thought he was an asshat in the first book, but after the novella in his POV and how he was portrayed here, I’ve officially fallen in love with him and I'm on his team. It’s weird though. I want to hug him while simultaneously whacking him over the head. The whole Adam-and-Juliette arc was pushed back in this book to explore his attraction to Juliette. I loved how his character grew here. He grew up with a terrible father figure and doesn’t believe he deserves mercy for some of the things he’s done, and I loved how Juliette realised that they understood each other in a way no one else did, not even Adam. She’s confused over her feelings for him, as she still cares immensely for Adam but she feels more open and secure with Warner; able to tell him things she can’t tell Adam. I can’t wait to see Warner grow and his relationship with Juliette explored in the final book.

While Adam and Juilette’s relationship was pushed aside (second book drama don’t you know), he was still a presence as he discovered new things about himself and struggled to keep Juliette in his life. I know we’ll learn more about his character in the final book.
Kenji is still as kick-ass as ever, with great lines and a wonderful presence. I love how Juliette began to treasure his existence and realise that he’s one of her favourite people.

The writing is still as beautiful and unique as ever. It’s told in a way like Juliette is writing everything down as it happens as there are still many crossed out lines, as if her thoughts are tangled together and she doesn’t know how to separate them.

I can’t wait to find out how this book is going to end. I honestly don’t even know; Mafi can take this book in any direction. Even with the love triangle, I have no clue who Juliette’s going to pick. Normally there’s one side that you know is a clear winner, and you just have to wait, but it’s anyone’s guess who she picks here. I’m still hoping for Warner though!!
Posted by Unknown at 08:00