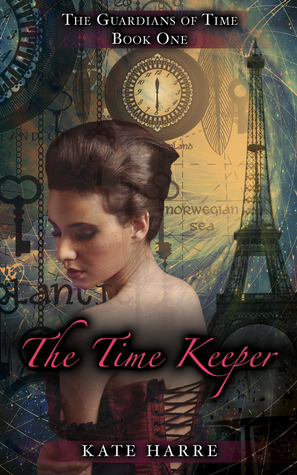 Undemanding and beautiful in an understated way, Emilia Delcourt is the perfect girlfriend for Justin, high school football hero and all around golden boy. With plans to go to Stanford University after graduation, the future is golden… except everything is not quite as perfect as it seems. Behind her quiet, submissive front is another Emilia – daring, feisty and craving adventure. And that girl is itching to break free. When Emilia finds out she’s from a long line of time travellers destined to save the world, it just might be time to find out who the real Emilia is. Sebastian Gates is ex-Army, smoking hot and able to do some pretty wicked magic. He has it all… except he doesn’t. Haunted by a painful past, he’s a loner and that’s the way he likes it. So when he’s partnered up with Emilia to travel back in time, he’s furious... to put it lightly! He’s always made a point to keep Emilia at a careful distance and that’s the way it’s going to stay. The only problem is, with no expectations on her, Seb is the one person who brings out the real Emilia and she’s determined to find out what makes this brooding, enigmatic guy tick. Thrust into Regency England and WWII Paris, they have to find a way to work together and trust each other. Surely, it’s only a matter of time before Seb’s walls begin to crumble.

*This book was given in exchange for an honest review. Thanks Kate!*

This was the start of a really interesting, enticing series. I’ve only read one other book that focuses on time travelling and it was really great to see a different perspective and notice the similarities and differences.

Emilia is our heroine – she’s your typical American teenager who has a great best friend, a boyfriend, and has hopes to attend Stanford after summer. Then her father drops the mightiest of bomb shells on her – she’s in the family business of time travellers, and has to join the mysterious “Society” with a partner and complete tasks given to save important people from the past. Her new partner is Seb, a boy who works with her father. He’s a magic wielder, and neither is too happy being partners as they’re often at each other’s throats.

This book can be cheesy at times and the writing very simple, but it was the characters that made it so completely enjoyable for me. Emilia is your stereotypical teenager; she ticks every stereotype trait in the book. Yet she’s so relatable, and funny, and endearing, I honestly didn’t care! She was incredibly independent, stubborn, and always stood up for herself. Her growing friendship with Seb was great to read as well.

Seb is a character with a lot of depth. He comes from a bad part of town, and doesn’t think he’s worth anything, especially the love of a girl as great as Emilia. Yet he still loves to spend time with her and always tries to protect her. It’s so sweet. And I loved seeing Emilia attempt to tell Seb that he is worth something. Their bond strengthened so much throughout the course of the book, and it was wonderful to read.

They start off constantly arguing, but that just meant the chemistry was off the charts! By partnering up together, they spend lots of time together and we get to see their friendship slowly blossom and maybe turn into the possibility of something more.

The time travelling was also very unique and quite believable. It’s a bit like the time turner in Harry Potter, but there are a lot of rules about time travelling that must be obeyed so that the future isn’t irrevocably altered. Sometimes fate needs someone to die and there’s nothing to be done about it.


The only thing I can say bad about this book is the ending. It was incredibly anticlimactic – more like an end of a chapter than the end of the book. But besides that, this was a very entertaining book and I definitely recommend it to anyone who’s interested in time travelling, or who wants a varied fantasy trope rather than the usual vampires or magical kingdoms, etc., haha.
Posted by Unknown at 13:08