Happy New Year & Review: Fantastic Beasts and Where To Find Them by J.K Rowling

Happy New Year everyone! I hope 2017 will be the best one yet. I hope it's filled with books, tea, chocolates, good food, good friends, and pets. Was there a scary thing you always put off over and over agin? Don't. Go out there and do it! Talk to people you like, ignore people you don't. Be happy with who you are and accept that you are absolutely amazing just the way you are.

And what better way to kick off this new year with a review from (my opinion) one of the best movies of last year? I am of course talking about Fantastic Beasts and Where to Find Them! 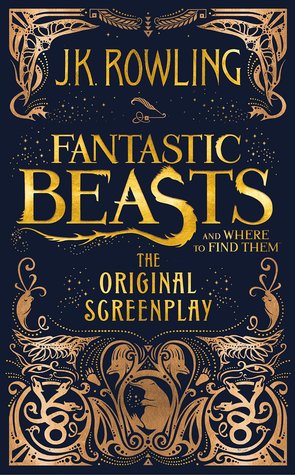 
When Magizoologist Newt Scamander arrives in New York, he intends his stay to be just a brief stopover. However, when his magical case is misplaced and some of Newt's fantastic beasts escape, it spells trouble for everyone…

Fantastic Beasts and Where to Find Them marks the screenwriting debut of J.K. Rowling, author of the beloved and internationally bestselling Harry Potter books. Featuring a cast of remarkable characters, this is epic, adventure-packed storytelling at its very best.

Whether an existing fan or new to the wizarding world, this is a perfect addition to any reader's bookshelf.

J.K Rowling is an author first, and a screenwriter second. So after this movie came out I'm not surprised she published the screenplay of it to her adoring fans. I loved the movie; I'm waiting impatiently for it to be released so I can watch it again! In the meantime, I was able to read this book and imagine I was watching the movie all over again, but this time, there was some more information regarding the characters that wasn’t expressed in the movie.

Eddie Redmayne has got to be the best character to play Newt Scamander, because Newt Scamander is a puppy. He is 99% cinnamon roll, and 1% seductive mating dance. I loved how much he adores his creatures, and has built separate enclosures for them, and calls himself their mummy. It’s impossible not to melt into a giant puddle of goo reading about him, as well as watching him onscreen. This screenplay also shed some more light about how important these creatures are to him, and just how close he is with them.

It also made the Credence/Graves storyline a lot clearer, and now I’m more hyped than ever for the sequel to come out! In the meantime, don’t go on that trip to Disneyland this year. Let’s all go on a trip into Newt’s case!