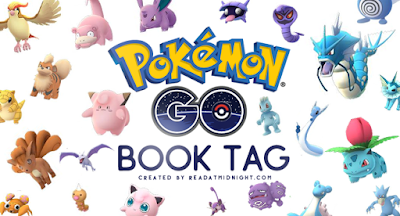 Anyone who’s anyone will have heard of the craze that Pokemon Go has created. I’ve been a Poke-geek for as long as I can remember, but I've never gotten into it. It could be that I live in a pretty rural area, so the only Pokemon I ever come across are Pidgeys and Zubats. There are only so many bats and pigeons I can catch! However, the hype of this game has made for some pretty incredible memes and videos, and now it’s come over to the bookish world! I saw this tag on Alex’s blog The Book’s Buzz, which was created by Aentee from Read At Midnight, and it looks so much fun! It’s really the only way I can get into the Pokemon Go craze without actually playing it, haha.

I've only just finished re-reading this series for about the millionth time. Even though there are some parts that could be tweaked, and the second half of the series isn't as great as the first half, this series always makes me feel nostalgic. I read it during the vampire craze about seven years ago, fell in love, and this book series will always hold a special place in my heart.

I've always loved Peter Pan, and reading the book is just as refreshing as re-watching the Disney movie. It fleshes out so many characters, such as how Peter and the Lost Boys arrived in Neverland, and his relationship with both Tinker Bell and Wendy. I haven't read a lot of classic books, but this will always be a favourite.

Ever since Red Queen came out in 2015, this book has been EVERYWHERE. And I mean everywhere. Every Waiting On Wednesday tags had this book featured on it. Nobody could wait for it to be released, including myself. And then when it came out, it wasn't as good as its predecessor. It made me wonder whether hype of a book can actually dampen the enjoyment of that book. I felt the same way about Kiss of Deception by Mary E. Pearson.

The main character in this book, Ember, has the same traits as every other YA heroine in YA these days. She was stubborn, hot-tempered, independent, and did what she wanted whenever she wanted.  There's also a love triangle, with your stereotypical bad boy and good guy on either side. Despite that, however, I still really enjoyed this book.

I adore this series. I love the characters, the plot, the epic fantasy-ness of it all. And even though this book hasn't been released yet, I am wary of starting it. Every book that gets released in this series is longer and longer, this one coming in at 704 pages. I'm already barely on track my Goodreads challenge, and since this book will be released around the time that college starts back up, I'm scared of starting a book this size when I won't have all day to just read. I may have to wait until I won't fear falling way behind in my Goodreads challenge.

I've read a lot of books that kept me up all night, but Cinder totally surpasses all the other books. It was one of those books I kept putting off because I was afraid I wouldn't like it, and then it completely blew me away. If you still haven't read this series, I recommend you start NOW.

Sydney and Adrian Ivashkov, AKA Sydrian. I will go down with this ship!

Contemporary novels will always have a special place in my heart, and Miranda Kenneally is one of my favourite contemporary authors. Every time a new book of hers come out, I sit down with a cup of tea and good music, and just read for hours, unable to stop until I have the entire book finished. This was the case with Catching Jordan, and every other book of hers.

Vampire Academy and its spin-off, Bloodlines, are two series I adore. I'll always love them. And the ending to the Bloodlines series left many doors open for possible more spin-offs, so I hope Richelle Mead will come back to this world I love so much and write more stories of my favourite characters.

After hearing absolutely nothing about this book before reading it, and never having heard of the author, I had no clue what to expect from this book. Aliens? Really? Aren't they just like E.T or the aliens from Independence Day? But I was blown away by the sheer awesomeness of this book and I've been a loyal reader of Jennifer L Armentrout since.

I saw everywhere when the third book of this book came out, but I'm still excited to binge-read this trilogy when I get the chance.

I first read this series on my Kindle, but I love the covers so much I'm willing to buy physical copies. I have Scarlet, Winter and Stars Above, so I just need this book and Cinder and I'm set!

This book came out a few years ago, but it's the author's debut novel and it takes place in Wonderland, so I'm super excited to read it!

I'll read anything from Jennifer L Armentrout; I don't even have to read the blurb. All her books I haven't read are in my TBR shelf and any new books are immediately added.

I feel like I've been waiting for this book for my entire life! And we're getting so close now :D

Erika @ Books and Stars
Jessica @ A Great Read
Fiona @ A Girl Between The Pages
Posted by Unknown at 10:46